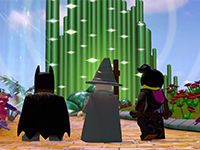 I was thinking by now we would all have a good grasp on what is going to happen in LEGO Dimensions when it finally launches on September 27th. I mean, the story should follow the same pattern as almost all of the other LEGO games that TT Games have put together right? Some big bad villain is doing something horrible and the heroes need to ban together and put a stop to it. Sounds like LEGO Dimensions in a nutshell right? I mean unless Warner Bros. wanted them to deviate from the winning formula I don't really see LEGO Dimensions breaking away from that in terms of story and relying on all of the IPs that are being brought in here to flesh things out with a bunch of gameplay. Sounds about right?

Well, wonder no more as the story trailer for LEGO Dimensions has been released for everyone to see now and we can get to the bottom of this conundrum. Well at least you can join me and others who were able to see LEGO Dimensions at E3 as this is the trailer that was shown off before the actual gameplay demo I already wrote about. Seems odd that Warner Bros. would have waited this long to show off the little video to the world but hey that's why they pay the big bucks to whoever is in charge of promoting LEGO Dimensions and not me. They had to have some good reasons to hold off on all of this I am sure.

Enough talking for now though. Here is the story trailer for LEGO Dimensions.

So…pretty much TT Games have not deviated from the standard story format for LEGO Dimensions. There may be a bigger overarching story here and multiple heroes from other dimensions but it really is the same that we've seen time and time again. Why did they hold off on showing this to the world? Although I didn't think that the LEGO Dimensions story was going to be what made the game shine anyways. There have been so many new and cool gameplay features that the other toy-to-life games don't have and what I've seen and shown so far would be just about enough to bring LEGO Dimensions into the race at the same pace as the others at least. LEGO Dimensions has so many other really cool features that use the "portal" that Skylanders and Disney Infinity just don't have yet.

Anyways. What do you think about the story here for LEGO Dimensions? Do you think there will be a lot more to it, especially with all of the other worlds being included, or is it going to be save he LEGO universe from some "big bad" and call it a day? Let us know down in the comments. Hells, what other story bits do you think will crop up because of the other IPs that are being glossed over? Comment that too. Also be sure to keep checking in here for more on LEGO Dimensions as we are getting ever closer to the release date and I am sure that Warner Bros. will have a lot more to share and that means so will we. Until then we wait for more on LEGO Dimensions.