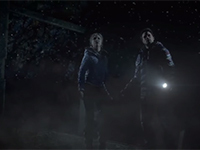 At the rate that we are getting new videos for Until Dawn we may not have much of a game left to play when it hits the PS4 on August 25th. At least that is how I am taking it from all of the stuff I've seen. That means I am also hoping that Supermassive Games has kept all the really juicy and bloody bits of this horror game under wraps until we are able to push past that date. Hopefully it makes sense but then again there are a lot of films and shows spoiled by all of the promo videos and teasers today thanks to the internet and cyber-sleuths out there. Let's just hope Until Dawn won't suffer because of its lack of franchise to work from.

Back on topic here for Until Dawn.

As we stated above, there is a new bit of gameplay for Until Dawn that has just been released into the wild for us to dissect like crazed, yet civilized, maniacs who just happen to love the sound a blade makes when it breaks flesh. Nine more minutes of gameplay and story for Until Dawn to be exact if you haven't skipped on ahead to the video and ignored all of this above. I hope you did because you'll have missed the warning here that this little bit is full of all kinds of jump scares that we can expect in Until Dawn. I hope those people who don't read wet their pants; but not shit them. I am not a monster here. I just want Until Dawn to do its thing right.

If you are trying to keep spoiler free for Until Dawn here then you can skip this video if you want. While it does show gameplay it doesn't show anything that Supermassive Games hasn't already shown us with other chapters and characters for the game. There are choices. There are the creep scenes we should expect in Until Dawn. There is also a cliffhanger to entice us to keep going. There is just nothing new in terms of gameplay so you can rest assured that if you don't see this you will be saving yourself for the story bits shown here for Until Dawn. You've been warned and now you can watch the new gameplay for Until Dawn if you so choose.

Did you watch the new video? Did you see anything new for Until Dawn that wasn't there before? How about the different choices that the player could have made here and what ultimate demise that could have led to. I am curious on how [SCENE DESCRIPTION REMOVED] would have played out if the other choice would have been selected here. Hopefully Supermassive Games has left a few of those kinds of choices among the real hard ones in Until Dawn to toy with us. What do you think? Let us know in the comments. Also, for those who want it, we will have even more on Until Dawn as we get closer to release so keep checking in here for everything Until Dawn.