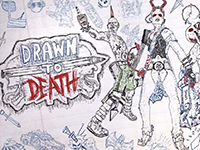 There were games at E3 I had to see and then there where games like Drawn To Death that I HAD to see on the show floor. The prior meaning a work required viewing and the later a personal need and the Bartlet Jones Supernatural Detective Agency and Sony San Diego were able to comply in both a booth format as well as a fan experience while out there at E3. No better way than to show off how far Drawn To Death has progressed since PSX and get us all excited for this PS4 exclusive to launch sometime in the near future. At least hopefully near future as after playing Drawn To Death again I want to have it at my beckon call at all times.

While at PSX it was extremely obvious that we were playing a very, very early version of Drawn To Death; here at E3 you could see all of the polish and user feedback had been implemented as it felt like a true game even though it is still a work in progress. By this I mean that most of the HUDs and selection screens where in action and no longer just a list to select from with button mappings. Now the weapons are displayed around your character for the choosing and displayed in such a way that you know where they are mapped to without the method originally presented. I only wish I had more time to have gone through all of them but again we were at a convention and everyone wanted to push on through to have a look at Drawn To Death; not to mention get right into the mix of the matches.

Moving right along, after getting all of the weapons and things locked in the entrance to the level progressed just about the same as it had before the first time I experienced Drawn To Death. The only major alteration that seemed to be in there was that I could see where the other players were at with a bit more ease so I could drop right into the mix of things or on the other end of the map completely. As I was using Alan again I generally dropped in away and quickly so that his natural healing would kick in while I collected the weapon and ammo around the level. It would seem that many others would do just the opposite as after I would see a character death tick off in the upper side I was surrounded by enemies and the fights would get well underway.

This leads me into a few things that I personally feel should be touched up on to help everyone who is in the mix of things with Drawn To Death. I found it quite a bit difficult to get a good sprint on as the controls require you to press and hold L3. This worked out well if I didn't want to make a turn or run in a zig-zag motion. This could be that I am used to the normal controls in the faster paced arena shooters that Drawn To Death is being set out to not be but it felt weird to not be able to do it if for a short bit; at least with any kind of ease. This could be the kind of player I am though and no fault of Bartlet Jones but it seems like it could be an easy tweak or option to press and hold or just get the burst for a short time without the need to hold.

As far as the actual combat went in the match it still held true as to how I remembered it from the PSX build with the exception of the melee attacks. In one of my matches I was surrounded by multiple enemies, having no ammo, and only needing one more kill to win. I tried to finish off the last opponent with my basic melee attack but it was almost impossible to connect and when it did it seemed like the risk of getting in close didn't pay off with the reward of damage. I wasn't looking for an instant kill, as those are almost nonexistent in Drawn To Death, but at least a way to defend or win the match as I scrambled for more ammo which seems to be the best way to truly win. At least that was the feel.

I will say that I do love the way that the matches were set up, needing five kills and losing one each time you die, as it made the matches for Drawn To Death feel like more than just timed thing. I say that as my first match played seemed to last only a few minutes as one person racked up kills with the quickness. My second match seemed to last upwards of 15 to maybe 20 as myself and the other opponents kept track on kills to death to try and knock the leader down before a premature ending to the game. If only that didn't lead to things being stacked against me with multiple players playing the one character that could bypass one of the features I love with Drawn To Death's Alan; the invisibility.

By no means is Drawn To Death, or at least this build, completely finished as Bartlet Jones seems to always be tweaking and changing the game based on use feedback but this was a more complete feel that truly gave what I think we can expect for the game. It is being handled with care and I see this progressing into a game that most, if not all, PS4 users will want to give a spin. Now we just sit and wait until the next big showing for Drawn To Death or just more information from the developer or Sony San Diego. We'll of course have all of those updates here so keep checking and share your thoughts down in the comments.