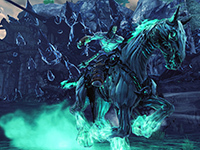 A bit earlier in the year we heard rumors that Darksiders 2 was going to be getting the next gen upgrade after Nordic Games purchased the franchise during the fall of THQ. At least it was all rumor and conjecture given a few product pages that popped up on Amazon. Not all too much else was said about it and it all kind of fell to the side. Well, at least it fell to the side for a little while as it has been confirmed and announced that we will be seeing Darksiders 2 on the PS4 and Xbox One in the way of the Darksiders 2: The Deathinitive Edition coming later this year. Winter to give the exact time frame that was handed out in the announcement release. I couldn't be happier.

Not only are we getting Darksiders 2 on the next gen consoles but it also sounds like we may also be getting a Darksiders remaster and the ever so wanted Darksiders 3 of sorts. You would have to look a bit deeper into the Darksiders 2: The Deathinitive Edition announcement but you can see that they want to keep the franchise rolling and make sure everyone gets a taste of Death and War.

Reinhard Pollice, Business & Product Development Director at Nordic Games: “We took over the franchise roughly 2 years ago and thought about the next chapter for Darksiders ever since then. Naturally (and extremely excitedly!), there will be a large-scale project based on Darksiders, but for now it is very important for us to take care of the existing games and make those available to a broader audience. Bringing Darksiders 2 to current gen was a logical step for us and the team at Gunfire Games know their trade inside-out, so we easily and quickly had lots of ideas that we wanted to realize for this specific edition.”

Of course we could go on and on about all the speculation on other aspects of the Darksiders franchise there but let's focus on the topic at hand. So outside of coming to the next gen consoles what will make the Darksiders 2: The Deathinitive Edition a must purchase for those who did or didn't miss out the first time around. Of course we have the usual improved graphics and higher resolutions for Darksiders 2 to be running at. With that goes the textures and everything else that is a selling point for remasters but it also looks like the loot system and aspects of levels have been reworked to better balance the game somehow. Al of that from the nice bullet points that usually come with announcements like this.

To go one further though it looks like the Darksiders 2: The Deathinitive Edition will also house all of the DLC that was available the first go around as well. Something that should bring the final gameplay of Darksiders 2 to about 30 hours. Here's what will be included in that long list in a nice bullet point form. Some are just weapons or character alterations but there are some full story and mission DLC that was added to Darksiders 2 way back when. The only thing missing here is the final price and we would be 100% good to go with the Darksiders 2: The Deathinitive Edition.