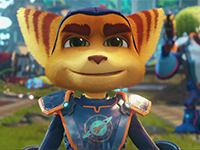 In the below trailer you will be able to see a bit of gameplay for the new Ratchet & Clank title but there are a few things worth noting here. This is not some up-scaling of a past Ratchet & Clank title but a re-imagining of the original 2002 game with closer ties to the expanded story that the film will be giving us all. So pretty much it was built from the ground up just for the PS4 and not another HD remaster that has been all the rage as we wait for the original titles to flow onto the console here. So expect a bit of the same but with modern controls, several new planets, new and updated gameplay segments, all-new Clank gameplay, all new boss fights, and new flight sequences.

Have a look for yourself and see all the new Ratchet & Clank goodness for yourself as we all wait for the playable version of the game at E3 next week. All I hope is that this is a real treat to the franchise and not just the normal film-tie-in game that is there just to milk money from the suckers of the world. Like Ratchet & Clank would do that…

Now you've seen the new Ratchet & Clank in action, kind of, what do you think? Does it look to do more for the franchise than just be an easy cash grab or is it just that? Does the fact that Insomniac has been working on this for a while now and still have another year put any worry to rest? Do you even care and are just dancing around that we are getting another Ratchet & Clank game? No matter what, we want to hear those thoughts down in the comments. Fill it in and be sure to keep everything locked in here as we will certainly have all of those Ratchet & Clank updates you could ever want until the game launches next year.