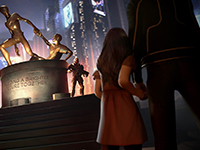 What many thought was a possible BioShock teaser from 2K Games has finally turned out to be none other than XCOM 2. Yes, we are finally getting a full on sequel to the franchise that is going to build off XCOM: Enemy Unknown. It looks like Firaxis Games is looking to ignore The Bureau and just move on with the whole story. Most likely a good move here but we are not going to focus on what XCOM 2 is not going to be. Let's focus on how it is going to expand on the franchise this November on PC.

Yep, XCOM 2 is a PC only title. Sorry to all of you fans who are not PC gamers out there but as of now that is the only format that we will be seeing the game in. As for the story though, it looks like we are further into the future here in XCOM 2 and the aliens have taken over. Not only that but have completely taken control to the point where we will be taking to guerrilla tactics to try and overthrow the new and presumably oppressive regime. Makes sense too since they are the technological superiors here in XCOM 2.

Here are another few key points on XCOM 2 before you dive right into the first new trailer for the game. I am sure that this will be expanded shortly after or during E3 but here is what else we have for XCOM 2. Then watch and enjoy what you may or may not be getting in the near future.

So now is the time to jot down your new thoughts on XCOM 2. Is it not what you were hoping for? Would you have preferred another BioShock title instead? Are you going to be left sitting on the sidelines wanting due to XCOM 2 being a PC only title at the moment? Let's hear those thoughts and discuss down in the comments. We will be bringing you more on XCOM 2 as time pushes forward so be sure to keep it locked in here for all of those updates and commentary.