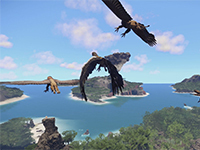 For all of you out there looking for a different MMO to play on your PC and PS4 then let your eyes stop wandering and end up on Wander. Not only is it a different MMO to sink your gaming teeth into but this is also the MMO that is being made with non-combat in mind. Yep, Wander is all non-combat although you should have known that by now from our previous coverage here. What is the big news here today is that Wander MMO, the developer, wants you to know that you will be playing the game on June 4th on said platforms. Talk about a sneaky release date for us all. That seems to be happening quite a bit here lately.

Not only do we now have the release date for Wander but we also have what generally comes with these announcements: STORY TRAILER! Well some form of a story trailer as I am still lost when it comes to the story of Wander in general. At least in the terms of the in-game story and not the development story. The following trailer also leaves a bit to the imagination to…wander… It sounds like you are part of a race of shape-changers and you are on a mission to just explore the world. I have a feeling that the shape changing will be the replacement for combat as ecology in general wouldn't allow for the fight or flight response to be removed in general.

Have a look at what Wander will be bringing to the table here soon. Even if the story does seem a bit confusing at this point at least it has a whole lot of pretty things to look at to get us ready for the release of the game. Check out Wander's story trailer now.

So now that you've seen the basics of the story for Wander, what do you think? It is an interesting take on an MMO game but is it your cup of tea just from description? Will you be dropping $25 USD on Wander or be waiting until the jury comes back in? Let us know what you think down in the comments and as always keep checking back in as we will bring you more on Wander as it, pun intended, wanders in for us. I slay me…err…I mean not slay me. That isn't allowed here.