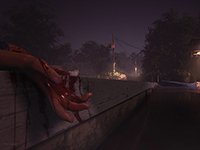 You may not remember hearing about Slasher Vol. 1: Summer Camp earlier in the year but it we had some fun news about the game. Now we flash forward a bit and we have even more about Summer Camp from Gun Media and it looks like it is shaping up rather well. At least based off all of the new screenshots and details that have been released out into the wild for us all to hunt down and hack up with…say…a machete. You know…? Because Slasher Vol. 1: Summer Camp will have us stalking out friends like an 80's film slasher on the PS4, Xbox One, and PC? Humor is lost on all of you horror and video game fans isn't it?

As I said we have a few new screen shots for Summer Camp and they show off how nicely the Camp Forest Green arena for the game is going to look. Nice blood splatter here. A dead body there. Mix in some dark and creep tents and cabins and we have the makings for the worst summer camps to ever be trapped in don't we? Just like we've seen in classics like Sleep Away Camp and Friday The 13th. Hats off to the developers and artists here so let's hope that we can keep the quality rolling out with the rest of this arena as well as any and all other ones that may be coming along soon or shortly after.

Why do I keep referring to this location as an arena you may be thinking? You are now at least. Well other new details explain that Slasher Vol. 1: Summer Camp is multiplayer romp where 6-7 friends play as the evil counselors of the summer camp and they need to survive the lonely Killer player while they do what they were born to do: punish the wicked. Of course this is nothing new for Summer Camp so far as that has been the overview since we first heard of the game. I bet you were getting all antsy in the pantsy about that and wanted to say something. Well hold on to your pants a bit longer.

What is new to the world of the known for Summer Camp is that the counselors will be playing more of a stealth style of game as they need to sneak around and look for escape. They will be making noise that will let the killer know where they are and this can be used to work together or against each other. At least this is how I read it because I would be all about luring the killer to the counselors I don't like just so I can make a safe break for it as he smashes their face into mirrors or thrown into outhouse pits for fun. There is also the option for the counselors to band together and try to take down the killer but where is the fun in all of that.

There is still no word on when we will get to see Slasher Vol. 1: Summer Camp in full action yet but as I said I think it looks to be shaping up well. But what do you think? Does it look and sound like a title you can dive right into and enjoy or will Slasher Vol. 1: Summer Camp be another Evolve style game that only a few gamers will embrace and master? Let us know down in the comments and keep things locked in here as we will be bringing all of the Summer Camp updates we can get our hands on. Hopefully more in short order…