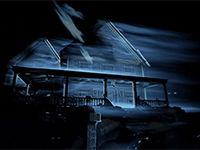 Good news everyone as we might be able to add yet another horror title to our gaming collection in the way of Perception. At least if we can all get up and help out The Deep End Games with their Kickstarter campaign to get the game made. Haven't heard of that team yet? Well just like Day For Night Games they are another group of ex-Irrational Games developers looking to keep the lights on by doing what they do best: make video games. We won't go into more on that for now as we have Perception to talk about and try to get fully funded. Let's dig into that now.

So what is Perception in terms of the video game? The short and dirty of it is pretty much imagine you are Daredevil without all of the training, a young woman, and you are investigating a haunted house. That is the quickest and most basic way to describe Perception. You don't have to take my word on it but that is my takeaway based on the gameplay mechanics shown where you are blind and can "see" by making noise or using the ambient noise around you. Here is the full description of what is going on here for Perception right from the horse's mouth though.

Perception is a first-person narrative horror adventure that tells the story of Cassie, a blind heroine who uses her extraordinary hearing and razor-sharp wits to unravel the mysteries of an abandoned estate that haunts her dreams. After months of research, she discovers an abandoned mansion in Gloucester MA. Once there, Cassie finds that Echo Bluff is worse than her nightmares. A ghastly Presence has tormented its inhabitants over generations, and it now hunts Cassie. She must solve the estate’s mysteries or become one of its victims.

Not too far off from my description although I am sure that was not the full intent of Perception here. If you still need more to go on before you fly on over and drop a few bucks to help the team's Kickstarter page to be successful, here is the first trailer to show off just how scare Perception could be. Especially since you can't just walk around making all of the noise you want in the world without any form of consequences. That would not make for a fun game now would it?

Not too shabby at all. In fact I am rather digging Perception much more that The Black Glove from the other team of ex-Irrational Devs. In fact it has me question just how they were able to accomplish the amazing effects in the Unreal Engine here but still only plan on bringing it to Windows PC. At least planning on in the terms that has been the only platform mentioned outside of stretch goals. With any luck though we will see Perception, sounds weird to say that, sometime in June of 2016 if all goes as they and we all want for the game. Let's just hope they don't befall the curse that seems to be plaguing all of the ex-Irrational Games developers…

I've said my piece on Perception now what do you have to say? How close am I to the Daredevil in a horror game statement here? Do you think that Perception has a great chance of succeeding in their campaign or do you see it falling flat? Are you going to throw down a few bucks to make it a reality like myself? Let us, the developers, and the world know down in the comment section. We'll be sure to bring you more as it comes in for Perception so be sure to check back and check back often to see if the game is going to become a reality…of sorts.