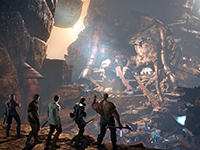 Technomancer was announced a little while back with only a few screenshots and a description to go off. Spiders Games have yet to make any time that I have been able to write home about but Technomancer still looked to have a bit of promise. At least more than I felt that Bound By Flame delivered on but still being burned by that title, pun intended, I overlooked Technomancer in favor of other titles. It's kind of how the video games industry goes when it comes to things like this. Well any industry really; so you may be thinking why are we talking about Technomancer now since I let it putter off into the void of virtual space?

Well for one, we have some new screenshots for Technomancer to look at and show that Focus Home Interactive was correct in giving Spiders another crack at making a AAA title for us all. There is no doubt that it looks like they have fine-tuned there craft given the new looks at the game. Not only that but it gives us our first look at the city of Noctis in the game with some of the great violence we will be perpetrating in Technomancer on the red planet. Yes, the game's events take place on Mars after something called the Water Wars. Sounds a little Mad Max-y to me but I have had my attention grabbed for Technomancer so we will dig a bit deeper.

Also we have a bit more word on Technomancer's RPG elements and how those will be experienced in the game proper. Obviously we are looking at skill trees here that allow us to focus on three different fighting styles in the game. We will also have companions that we will drag along with us on said adventures that we can level up with. All of the other craziness we expect for a modern RPG will be in Technomancer as well as five different endings to the game's story. That will be a nice touch as it will make our actions count for more than just little bits of dialog in Technomancer.

As of now sadly this is all the extra info we have on Technomancer. Thankfully though it looks like Spiders Games will be on site at E3 giving a huge presentation for Technomancer so in a few week's time will should all be up to our eyeballs in new information for the game. At least as long as people are able to get all hands on with Technomancer and not just have to go through second hand sources to get the details. That is my hopes as the world and concept here have finally captured my attentions and I need to know more. I am sure you are in my boat here for Technomancer now. We need more paddles don't we?

Am I correct in making the assumption about you and Technomancer now? Do you want, neigh, need to know more? Do you think that the above images make Technomancer look leaps and bounds over their past titles? Let us know what you are thinking down in the comments below. Check back often as we will keep you up to date on all things Technomancer as soon as we get all the updates.