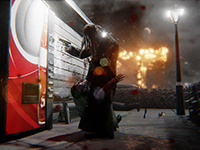 It looks like Destructive Creations jumped the gun and pre-ordered version of Hatred will NOT be playable until June 1st. Here's what they had to say over their Facebook Account.

Time for some bad news.

It appeared that it is technically impossible for us to make Hatred available earlier for people who made pre-orders.

We screwed this thing up, because we didn't check if it is possible before sending the official announcement :(

Game will be available on Monday, June 1st for everyone. We promise to reward you this disappointment in the future - we still have your e-mails in our database.

We are really sorry for giving you false hopes, we wanted to make you feel good, but as usual: shit happens.

But don't worry, it's not the problem with the game itself. Everything is finished and waiting for the official release. Today we're dispatching keys for press, so you may see first reviews and reactions on weekend.

Until Monday, then. We hope you will be pleased with what we have produced.

The day is almost upon us and we will see if Hatred is going to live up to all of the outcry that it caused or fall into obscurity forever. June 1st being the official launch date on Steam for the title is just around the corner. That is if you didn't pre-order Hatred. For those who were willing to shell out the cash to give the game a try instead of condemning it from the start it looks like you will be able to give Hatred a spin on May 29th instead. I'm not talking just about being able to pre-load the game but actually dive into all of the madness we are expecting for Hatred from Destructive Creations.

If you are in the gaming world then you most likely know what Hatred is all about. If not then the quick rundown of the game is that it is an isometric shooter where we take on the role of a man who has had enough of the bullshit the human race has to offer. He has now chosen to go on a killing spree to take out as many people as possible before committing suicide by cop. At least that is what has been shown for Hatred until now so things could be different in the case that Destructive Creations have thrown in any weird curve balls for the story. It's possible but highly unlikely. None the less I am sure Hatred will cause more stirs in the coming week to release.

If you are looking to get in on the early Hatred access you are a bit out of luck though. Pre-orders are now closed for the game to give those fans who wanted to give Hatred its full chance that nice little extra over those who were or still holding out. It may not sound like much but it is nice and kind of shows that Destructive Creations isn't out to just cause mayhem with Hatred as all of those bleeding hearts would want you to think. At least that is how I am looking at all of this and can't wait to dig into Hatred that little bit of extra time early.

Are you excited to be getting Hatred a bit early? Are you actually going to be getting Hatred or just have the outcry based on all of the bullshit reasons others have told you to be upset about? Are you just going to play GTAV and pretend that you are playing Hatred with more colors? We want to know what you think and want you to share down in the comments no matter your personal feelings toward a video game that has yet to even release.