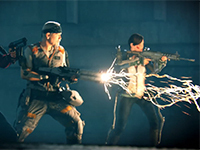 The next major DLC for Call Of Duty: Advanced Warfare is just around the bend here and it looks like there is going to be a huge addition to the Exo Zombies mode that was part of the first pack. This part being called Infection and all part of the Ascendance pack that will be out tomorrow (3/31) on Xbox Live. Other platforms will be in short order of course but hopefully you have that Season Pass for Call Of Duty: Advanced Warfare so no matter what you won't have to worry about the dates outside of when you are going to get to play all of the new DLC.

As has been usual for Call Of Duty: Advanced Warfare and the DLC, this new Exo Zombie experience will bring along some new weapons, new zombie types, new maps, as well as new support for the four wayward heroes trying to survive the Atlas infection. Hopefully you've played through the first part by now so you have a clue as to what is going on in the following gameplay for the DLC. I mean, Burgertown isn't going to be an easy place to survive and escape from when the Zombies are having a human-mac-attack…

I can't seem to put my finger on it directly but the voice for the extra support in Exo Zombies Infection here sounds extremely familiar. If I had to speculate I'd say we are getting another "zombie" expert added into the Call Of Duty: Advanced Warfare universe here. To me it sounds like Bruce Campbell of Hercules and Brisco County Jr fame. (Yes, I know Evil Dead would have been more on point here.) It sure as hells sounds a lot like him flying the chopper in the above video. Hopefully he is going to be listed as playing Bruce Campbell in this DLC pack and we can see him mowing down hordes of the undead as he should always be doing.

What say you though? There has been no true official announcement about Brucy joining up as of the writing of this. Is it him? Would you prefer him to be playing himself for good old B-movie sake? Do you even care and just want more zombies than you can shake a chainsaw at? Let us know down in our groovy comment section.