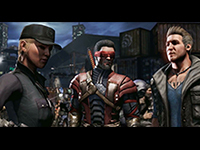 Yes, I kind of just glanced over the fact that Sonya will be playable in Mortal Kombat X. You can see her in action just a bit below in the latest trailer showing off all of the Cage family that I knew was going to be in the game for a while now. At least if you've been following along with my Mortal Kombat X coverage. So have a look at the Cage family and we'll dig into all of the other juicy bits that have also cropped up now that embargoes have lifted.

So as would be the case with GDC, Mortal Kombat X was playable for some of the perceived better and paid media outlets. It was most likely behind closed doors and NDAs had to be signed or we would have heard about all of the following character about a week ago. Anyways, the first chapter of Mortal Kombat X was playable and will be following the structure that we know from Mortal Kombat 9 and Injustice already. It works and makes sense as it works well for the franchise.

Above said media types were allowed to play the first chapter of Mortal Kombat X which focused on Johnny Cage's section of the story. What is interesting here is that there were two characters not confirmed as fighters but were pitted again Mr. Cage during the chapter. Those characters were:

Also shown but not playable in the cinematics of the above mentioned demo are the following characters:

Again this would be odd to have the full character models and voiced actors for them and not include them in the roster of Mortal Kombat X but the list of playable characters is now up to 20 confirmed and this, with the other rumored characters, would push us into the insane level that was all of the characters and DLC from Mortal Kombat 9. Maybe NetherRealm has it in them to do this and kudos on them. Hopefully we find out for sure as we are almost literally a month out from launch.

What do you think here? Too many characters now for Mortal Kombat X? Not enough? Give us all of your thoughts and feelings down in the comment section. Maybe Ed Boon will grace us with a hidden confirm if we get enough? Most likely not though…