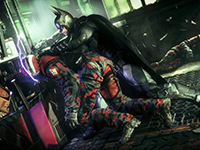 The fact that Batman: Arkham Knight has been set as a 'M' rated title came as a bit of shock to many when we first heard about it. Up until now Rocksteady has kept everything at least a 'T' for Teen rating with all of the past Arkham titles and I am sure that Warner Bros. wanted to keep it that way as bumping the rating could and most likely will exclude some players and fans of the franchise from experiencing Batman: Arkham Knight. I feel for you up until the point of me getting an awesome and dark game for my PS4, Xbox One, and PC. From there my sympathies are gone.

Up until now though we really had only the 'we wanted a dark story' as the explanation from Rocksteady as to the reason that Batman: Arkham Knight is going to be rated 'M'. Now we have the official listing from the ERSB as to why the game is rated the way it is. The long and short of it here sounds like it is mostly due to violence and torture scenes more than anything. This fits well given the way all of the characters in the Arkham franchise have always been darker and now they have evolved to the next level in Batman: Arkham Knight.

Here's the link to the ERSB description for Batman: Arkham Knight or you can read it all just below.

Rating Summary: This is an action-adventure game in which players primarily assume the role of Batman as he battles several villains spreading chaos across Gotham City. Players traverse a variety of locations around Gotham while battling thugs, examining crime scenes, and occasionally rescuing hostages. Players engage in melee-style combat using punches, kicks, and gadgets (e.g., batarangs, explosives). Enemies cry out in pain when struck, and some takedowns are highlighted by brief slow-motion effects and loud impact sounds. Some sequences allow players to use tank-like vehicles with machine gun turrets and rockets to shoot enemies; a vehicle’s wheels are also used to torture an enemy in one sequence. Cutscenes depict characters getting shot (on and off camera) while restrained or unarmed. Large bloodstains/pools of blood appear in crime scenes and in the aftermath of violent acts; one room depicts a person torturing a character on a bloody operating table. During the course of the game, players can shoot unarmed characters and a hostage. Neon signs in a red-light district read “live nude girls” and “XXX.” The words “b*tch,” “gobsh*te,” and “a*s” appear in the dialogue.

So there you have it. Seeing as the worst part of Batman: Arkham Knight in terms of Sex or Language happens to be the exterior of a strip club and the word Gobshite then we have to just look at all of the violence that we will be doling out and taking. Or at least watching as the nightmares of Batman: Arkham Knight play out. The game does feature The Scarecrow after all and we should expect all of the worst in humans to come pouring out in the franchise based in insanity. Not to mention of course the torture on an operating table in the game. I am a bit curious on whom that will be showing off in the game.

Does this description of Batman: Arkham Knight help explain why some of our younger gamers may not be able to play the game? Is it worse than anything we've seen or heard yet? Does this excite you like Edward Nigma with a 100-sided Rubik's Cube? Let us know in the comments below.