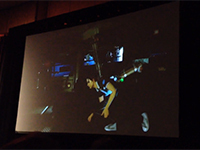 Hopefully by now you've had a chance to experience Alien Isolation from Sega and Creative Assembly. It was and still is a spectacular addition to the franchise and well worth the price of purchase. It had all the fear in the right place. It had all the action in the right place. But would it still have held as strong if it wasn't set as a first-person perspective? According to some new footage that has hit the web Alien Isolation had a build version that set it in a third-person perspective and we have it to look at just below.

Have a look at the short clip that was smuggled out showing off the Alien Isolation that wasn't and then we will move on with a bit of discussion here.

So there you have it. Alien Isolation in third-person instead of first-person. It looked like it works and shows off that Creative Assembly took some time to make the character model look great during gameplay as well as in the story scenes. Fortunately for them I think they made the right decision to make the jump into first-person instead of what we just saw. Not only to save on some of the rendering processes but I think it added to the overall dread and fear they working looking to instill.

Hopefully you saw it here but one of the things that I loved about Alien Isolation is the fact that your view was just as limited as Amanda's was. In this third-person mode we have all the little tricks to peak around corners and see what Amanda shouldn't be able to see; all to aid our mission in getting through Alien Isolation with ease. This would have also led to us being able to look further around corners and spy the alien and other threats making their inevitable appearance not as startling in the full scope of Alien Isolation.

The driving "fear" in Alien Isolation was that isolation feeling. Not just in being alone on the ship fending for yourself but also in the fact that your senses were a bit isolated as they would be in the real world. We were not playing some kind of guiding character over her shoulder in Alien Isolation, we were the character. We had the same limitations she had and that made the game all that more intense. Even watching the above footage made that feeling less intense.

I won't lie though; it would be a fun option to have implemented via an update for Alien Isolation to allow for us to play in third-person for the whole game. I'd rather that be in other titles too but it seems something that is already there and just needs to be activated. It could lead to another fun romp through Alien Isolation for me. Maybe we'll see it and maybe we won't. Either way at the end of the day I think Creative Assembly made the right choice for Alien Isolation.

What do you think? Let us know if you would have rather had a third-person Alien Isolation instead in the comments below.