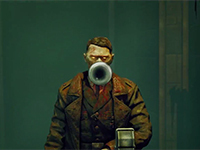 It was revealed earlier this year that Zombie Army Trilogy was coming to the next-gen systems this year. To be exact it is coming to the PS4 and Xbox One on March 6th which would be next week. Some of you out there may still be wondering what Zombie Army Trilogy and that is where this update comes in. We have a new trailer for the game and it explains all of the ins and outs that we will be getting next week and we have it here for you to watch and enjoy. Who knows maybe it will pique your interest enough to give it another look. I mean it is Zombies and Nazi in a shooter title so it is the best of all worlds for us gamers.

Here is said trailer and all of the updates coming for Zombie Army Trilogy for you to have a look at and make a judgment. Have a look.

I know I am for one excited to get to play all of the titles included in the Zombie Army Trilogy on my PS4. I am also really digging the set up that Rebellion has taken with bringing us another HD kind of update instead of a full new IP. I guess we'll find out next week if it was a great decision I guess. Hopefully it will be an amazing experience for a new and old audience and give us another great shooter on our next gens while we wait for the next big game push.

What are your thoughts on this? Do you even know what Zombie Army Trilogy is now? Hopefully so. Let us know everything down in the comments below.