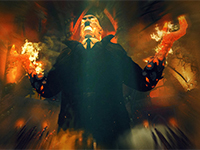 Rebellion has announced today that we will be getting the Zombie Army Trilogy for the PS4 and Xbox One sometime this year. These would be a collection of HD remastered version of the Sniper Elite post-apocalyptic spin-offs titled Zombie Army. Most would know that the first two titles were already available for the XBLA, PSN, and Steam. For those who are just finding out about it or playing on their PCs then the extra bonus is the previously unreleased third title being added in. Thus making the title Zombie Army Trilogy not Zombie Army HD Remastered For More Money.

There is no solid release date for when Zombie Army Trilogy will be available for purchase on the next gen systems, or the discounted version with the third title added for Steam buyers. What we do have though is a fun little trailer showing off all those upgrades necessitating the new bundle, a nice giant Zombie Hitler, and a sneak peek at the new content that no one has played yet. At least those of the public as I am sure it has been played by Rebellion quite a few times already. They would need to test and make sure the game doesn't suck after all.

If you've been thinking that you need to be able to kill more Nazi Zombies in your video games then it looks like Zombie Army Trilogy will have you covered. For those who need more reason to repurchase the titles or just purchase in general, look after the video for a list of all the new upgrades and what will be coming when Zombie Army Trilogy finally rises.