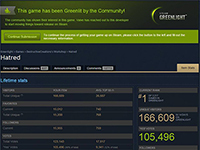 For a game like Hatred that has been getting a lot of hatred, pardon the puns this time, it seems odd that if all of it was true then the game would not have been approved by Steam's Greenlight project. Yes, Hatred has reached the appropriate level of positive votes and it is now greenlit to be on Steam once Destructive Creations actually finishes building the game. It looks like all of that "negative" press the game was getting finally made this title get the steam roller momentum, pun not intended, so we will be seeing Hatred on our PCs via Steam in 2015.

Just in case you are one of those people who want to see verified results, here is the stats screen for Hatred on Greenlight. This is of course after it was removed and then re-added to the user voting based service earlier in the month. Enough shooting my mouth off. Have a look for yourself. Just like before I find it interesting that a game like Hatred that received so much hatred over the past months since the first trailer popped up that almost 86% of users wanted it to be greenlit. Maybe I am only seeing the loudest of the soap boxers out there but I could have sworn that Hatred would have been denied due to users not wanting a game like it. I guess we all spoke with our votes and now Hatred will be gracing our screens with all of its ultra-violence and blood soaked levels. I personally see this as a win for the gaming community on the whole.

Some loud mouths on the internet have tried to use their clout to appease audiences that they think Hatred shouldn't be made. These so-called voices of our gaming community. I'm glad to see that these softhearted individuals have been shown that they are not the end all be all as the gamers have spoken and truly want Hatred. You've shown that you don't have to follow what the paid voices have to say and you can think for yourself. Good on you. No we can go back to bashing on what we think everyone else should hate as we can't stop Hatred anymore it would seem.