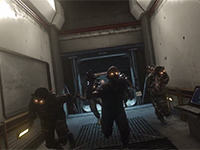 One of the big draws for Call Of Duty: Advanced Warfare was Kevin Spacey and how amazing the performance he gave ended up being. The gameplay was just about as amazing as the performance for those who really care about the gameplay over how many huge celebrities that can be crammed into the narrative. For those of you who care about the actors and zombies then do we have a great tease from Activision and Sledgehammer again for Call Of Duty: Advanced Warfare Exo Zombies. We have four times the names and another short glimpse at that gameplay stuff…for those that care about that again.

Joking aside for a bit, it looks like we are getting John Malkovich, Bill Paxton, Rose McGowan, and Jon Bernthal added into the mix for Call Of Duty: Advanced Warfare. All have faced off with the undead in some way or another and this time they will be teaming up to voice, and most likely look like, four Atlas employees who are untrained and unprepared for the zombie outbreak. Kind of odd that all of the highly trained Atlas people wouldn't have made it through the first onslaught but I guess we need a reason not to start playing as badasses at the beginning of Exo Zombies.

I guess we'll all find out in the coming weeks as we gear up for that first bit of DLC to come out and give us our first look at the zombies mode in Call Of Duty: Advanced Warfare. Until then here's more of that tease that was mentioned higher up the page here. Enjoy.