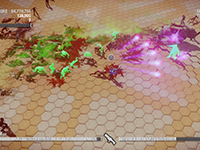 It's a rare thing when a game like #killallzombies captures my eye and truly keeps me coming back into the mix to do just what the game's title states. I was thrilled with the original idea that Beatshapers threw out there. I thought it would be a title that I played a little bit, generally enough for a full review, and then never pick up again. #killallzombies has proven me wrong as it is one of the few titles I drift back to when I don't have to keep covering all of the other games that keep coming out. This is also why I am excited to hear that we are getting our first content update for #killallzombies now.

If you need more background on #killallzombies you can check out my review, get excited, and then read about what this new update will be bringing to the game. With 20 new perks hopefully that will fix the only major gripe I could muster up for the game. Enough teasing though. Let's hop into what we are getting added to our #killallzombies experience in list form.

If you have yet to dive into #killallzombies there is no better time as of yet to do so. The additions here look and sound like they are going to be a blast to play with. I only wish that those damned Twitch spectators would be kind enough to me so that I could actually make it all the way to face off with the CrusheRhino but it's a team effort in the end. Then again having a Volcano Gun will be helpful in making sure that all of those zombies go down faster as I run around like a headless chicken. All fun for hours and hours none the less.