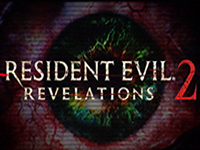 Right out of the gate you can tell that Resident Evil Revelations 2 is being designed for a next gen platform. It looked stunning and had the perfect aesthetic we would want in the current stage of gaming. We of course have seen this in the trailers and videos up until now but having it live showed that there has been little to no doctoring of the visuals for Resident Evil Revelations 2 for promotional purposes. It looks great and even though it was shown off on the next gen consoles I think that will carry over as well as possible. But that isn't what makes a game fun now does it.

Out of the box Resident Evil Revelations 2 handled just as Resident Evil 4 did. Minus any little imperfections that may have been in that game. Even the buddy system felt a bit more perfected even though the game forces specific things to happen just to use Moira. Case in point, we've all seen in the trailers where the keys to get out of the first area of the game are located. You can even see them hanging when you look around. You just can't shoot them down until you've had Moira flash the light on them which felt really odd. This extended out to even item pickups. Even if you see them in plain sight you can't pick them up without the magic flashlight shining on them first.

This is something that is going to bog down the whole game if that wasn't something just for the demo. I can understand if it was a tutorial thing so the game could make sure you know how to handle Resident Evil Revelations 2 before moving on but it happened every time. Are we going to have to swap back and forth constantly instead of being able to pick up herbs and ammo? I sure hope not. If that is the case then Moira and the other sidekick character are going to feel forced and not just part of the narrative to hopefully help you out. It was that annoying at the end of the day and should be something that can be disabled.

I will have to speak on the horror aspect of Resident Evil Revelations 2 being top notch again. Even though most of what I experienced here was more on the jump scare side of things, none of them were predictable in the least bit. I did question where some of the enemies were hiding before as they did appear out of rooms I thought I had cleared already but I'd be lying if there weren't a few times I jumped thought I was going to lose the controller in my hand. Unlike the high action that we've had shoved at us as of late, Resident Evil Revelations 2 does a great job of putting the horror back into the franchise and this was just a small portion of the first episode.

I am excited to actually see how Resident Evil Revelations 2 progresses from where it is now as I can hopefully see it all going in an upward motion. That's a good thing. I was a bit hesitant when I first heard about Resident Evil Revelations 2 given the past few titles but I think Capcom is back on track now and this game will be something we would have hoped to have last October. If only we didn't have to wait until February now. It seems like it is so far off.