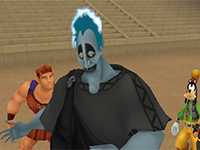 Kingdom Hearts HD 2.5 ReMIX is out next week here just in case you have forgotten. Yes it is yet another HD remaster in the wave of all of the others but in this case it is a great mixture of many titles and worlds that gamers and Disney fans have grown to love over the years. This was of course the case when all of the titles in the mix first came out but Kingdom Hearts HD 2.5 ReMIX is looking to rekindle that love as well as reach a new audience who may have missed out on the titles due to platform restrictions and/or age gap in their gaming career. Kids who were just born when Kingdom Hearts first launched are now 12 years old after all.

For those of you not in the know of all the Disney and Final Fantasy worlds that were in all of the titles included in Kingdom Hearts HD 2.5 ReMIX it looks like Square Enix wants to help refresh those memories. Or inform all of those new to the whole Kingdom Hearts thing. The first one we have here are a good sampling of all the lands of Disney that will be connected as you try and stop all of the heartless and villains standing in your way. This also happens to include one of my favorite characters Hades. Yes, the James Woods Hades there. Have a look.

So there you have it. The characters and worlds we can expect to have in Kingdom Hearts HD 2.5 ReMIX. Of course all of this is to get everyone up to full speed when Kingdom Hearts III comes out in a year or so. This most likely means that we are going to get yet another HD edition for Kingdom Hearts for the PS4. Maybe some crazy collection that houses every iteration of the franchise so we can play from start to finish in one long and amazing sitting before we get plagued by Frozen's "Let It Go" for the next few years. We'll see I guess.