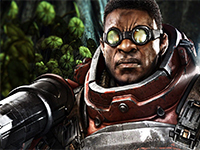 We have our third Assault for Evolve now named Parnell. I believe that is all of the launching hunters that we will be getting in Evolve this coming February although I am sure that we will get hammered with DLC to keep the game ever evolving. You would be lying to yourself if you didn't think that was going to be the end goal for Evolve. At least the game is fun and the new hunters look like they are going to add well into the mix so maybe that will be forgivable as we get hammered more on the PS4, XB1, and PC for game superiority. I'm getting off topic now.

So here we have Parnell the Assault for Evolve. The newest super soldier to be thrown into the mix to take down whichever of the four monsters may be roaming the wilderness. It is worth noting that the super soldier moniker is not just a title but also the name of the ability that Parnell has in Evolve. An ability that makes everything he does move at lightning fast speeds for a short amount of time. That includes reloading and firing his combat shotgun and multi-fire rocket launcher. What's a little bit of health drain for that extra bonus right? A welcomed addition in the end I'd say.

Of course you don't have to just take my word for it here as IGN has been given the exclusivity of covering Evolve and was nice enough to hoard all of the new gameplay just below. Guarantee Evolve is going to get at least a 9.6 out of 10 there even if the masses disagree. Ethics indeed… Damn, off topic again. Just watch the new Evolve footage already.