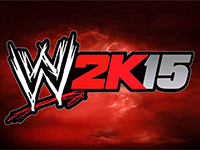 After a brief delay the long running WWE series has finally come to the next gen consoles. This time developed by visual concepts and helped by series veterans Yukes. WWE 2K15 makes a bunch of improvements upon the core gameplay of past games.

WWE 2K15 makes some great improvements over past games. I didn't have many things that I disliked about the game except for one feature. The creation suite in WWE games has always been a staple in the series. It was a place where players could spend hours creating their own content such as superstars, arenas, and championships. The problem with WWE 2K15 is that a lot of these creation tools are stripped away with the transition to next gen. This was the first thing that I noticed as I created my superstar. Every aspect of the creation process had fewer options from the hair to the tights. For example there are only 18 hairstyles compared to older games which had around 60.

Create a superstar isn't the only affected feature. Create an arena and championship has been cut from the next gen version of WWE 2K15 completely. This is odd considering that these features were present on the last gen version.

WWE 2K15 looks fantastic on the new gen systems. The new face scan technology in WWE 2K15 is phenomenal. All the superstars look just like their real live counterparts and the new animations mark the best for the series thus far. 2K used motion capture technology to make the moves look as realistic as possible. The superstars are not the only thing to get a makeover. The crowds now look more realistic with more varied character designs and animations. There are now new child animations and there is never two of the same characters right next to each other like past games. Visual Concepts really put in a lot of effort here to make the environment of the WWE feel more real than in past games of the series.

The core gameplay in WWE 2K15 has been completely revamped to reflect the flow of a match on a live event. One of the biggest improvements is in the pacing of the matches. Now the matches start with a tie up mini game. Both players choose a hold and then rotate the controller stick to find the sweet spot to transition to the next hold. This does a great job recreating the opening moments of a match where the superstars are feeling each other out. If you dislike the new mini game worry not as this can be turned off in the option menu. There is also a new stamina meter that adds to the realism. Stamina encourages you to plan out your moves and to save you energy in harder matches. As your superstar takes damage he will move slower and take longer to recover he will even use the ropes to get himself back up in the later stages of a match.

WWE 2K15's main mode is the new My Career mode. In this mode you will create your own superstar and start in NXT as you attempt to get to the main roster on RAW. Your main goal is to make it as a superstar and eventually make it to WrestleMania. This mode is perfect for people who liked the universe mode but only wanted to focus on one superstar. This mode is something that can be played for hours as there is a lot of content to enjoy. In this mode you will build your superstar through getting followers through social media and earning points to upgrade you attributes and purchase new skills. As fun as My Career is it does make one slight missteps. For some reason the difficulty can't be changed in My Career it can only be played on normal. This wasn't a problem at first but when I got my superstar's stats up it became way too easy to the point I was destroying opponents without even trying. Hopefully this is addressed in a patch so we can adjust the difficulty.

WWE 2K15 makes a great debate on the current gen consoles and improved on a lot of the gameplay features of past games. If you were a fan of the older games and have a next gen console it is well worth your time with the new career mode among other features. WWE 2K15 is awesome on the new generation.

WWE 2K15 was developed by Visual Concepts and published by 2K Games for the PS3, PS4, Xbox 360, and Xbox One. WWE 2K15 released on November 18th, 2014 for the PS4 and Xbox One. A copy of the game was provided by the publisher for reviewing purposes.