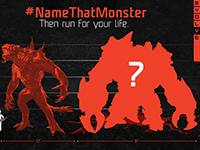 We are getting some updates for Evolve pretty steadily here as of late. We still have no clue or word on what the third monster we are going to be getting when Evolve launches in February for the PS4, XB1, and PC. We do on the other hand have a clue as to what we are going to be getting for the fourth monster. You know, the monster you will be getting as DLC if you pre-order Evolve well in advance. The kicker too, you will get a chance to help name the beast before it has even made it out of prototyping.

Turtle Rock and 2K are giving gamers a chance to help name the fourth monster for Evolve. Well, give you a chance in the way that they have four names already in the works but they want to let us all vote on which they should use moving forward. Nice of them to let us have the illusion of creation when all of the names are pretty much the same when you boil it all down. Here are the names you'll be able to vote on. So pretty much from the sounds of it the new monster in Evolve is going to be a tank at its core. The Goliath has been slated as the "brawler" and the Kraken can be seen as the "ranged" so it makes a bit of sense to look at this still un-named creature as a tank. This can also kind of give us a clue as to what the third un-named monster will be when you look at the hunter types of Evolve as well as video game stereotypes but I think we are going to get that blasted in our face in the next week or so. At least if they keep up their BS "exclusive" stuff with IGN. I'm hoping for a "medic" type that can rapid heal themselves but has weak attacks but that's just me.

Back to the task at hand though. If you want to weigh in your vote for the name of the next Evolve monster you can head over and cast your ballot here. I wish this was a real naming contest and not a general vote but I have a feeling having a Gargling Cock Sweat in Evolve might push the ratings past where 2K and Turtle Rock want it. You only have yourselves to blame trolls and fools of the internet…