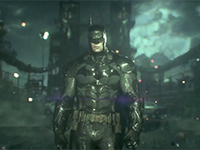 You've been waiting for some new Batman: Arkham Knight footage and it looks like Rocksteady and Warner Bros. are ready to oblige you with that want. We have some "new" gameplay for Batman: Arkham Knight just a bit below and it is… nothing all too new except for those who have yet to make it to a trade show or major convention. While the footage is quite cool and shows off Arkham Knight rather well, don't read into all the hype that everyone else is placing on it as it isn't anything too new for most.

Then again, I am looking at this as someone who has been neck deep in all of the gameplay and news that has come out for Batman: Arkham Knight since we first received the announcement. You're here reading this most likely because you don't have the time or want to place forth the effort into keeping full tabs and rely on us to do it for you. Good on you. I'll give you the treat that you came here for after following the carrot down the rabbit hole. That's a thing right?

Pretty much add about 27 more minutes of combat and travelling around Ace Chemicals here and you will know what has been behind closed doors for a few months now for Batman: Arkham Knight. You can take it all as a great teaser if you've seen it before though as it looks like on December 1st we will be getting the next part of this. If memory serves then it should be truly all new footage as this clip ended about where I remember my demo ending way back when. I know I'll be doing what the video instructed and keeping an eye on batmanarkhamknight.com to see what is to come.

I do find the date rather interesting too as it was rumored that we would get a good new look at Batman: Arkham Knight during The Game Awards on December 5th. On top of that some new hands on over that weekend during the PlayStation Experience. Don't get me wrong, I'm cool with getting it earlier and not having to wade through a bunch of talk to see what Rocksteady has for us but you'd think with such a huge and anticipated title like Batman: Arkham Knight it would be a focus for the show and not something they would want to show off on their own. Either that or we are getting a huge dose of Batman: Arkham Knight next week kicking off with Part Two of the above gameplay footage.