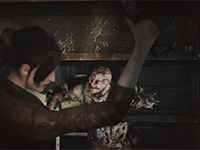 To try and help you get a better grasp on Resident Evil: Revelations 2 though we have a bit more gameplay for the game to try and help you understand what is going on. For instance, I am still not sure why Moira refuses to handle firearms or any weapon in Resident Evil: Revelations 2 outside of requiring the flashlight mechanic to be utilized. It sounds like there is some reason we may see during the story but it still makes no sense given the game's situation. If she had a real phobia of them she wouldn't want to be around Claire after all…

It will also be interesting to see how Capcom is playing with non-infected and just insane people for the enemies here. Only issue I see is that no matter how crazy someone is they can't live through some of the body modifications shown without being dead in seconds but that is part of the suspension of disbelief. That is a lot of suspension though unless it comes to light that both Clair and Moira are the ones losing their minds and are hallucinating the messed up creatures. Crazy things do happen when you get drugged up against your will.

I am also interested in seeing how those damned smart bracelets play out in Resident Evil: Revelations 2. They are stated to change color based on the fear that the characters are experiencing but there is no real explanation on what that all means. Is it just a HUD akin to Dead Space's health bar for something not related to health and ammo? Maybe. It could also be just something that only has story attachments in Resident Evil: Revelations 2 and nothing more. All I know is that I am ready to find out what and why. Hopefully those answers come in short time.