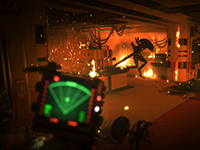 If you've managed to power through Alien Isolation and have become bored with all of the challenges and survivor modes then you are in luck. Looks like you won't have to wait too long for the first batch of DLC for Alien Isolation to release as it is only a week away as of today. Corporate Lockdown is the first of five add-on packs for the game from Sega and Creative Assembly which also adds on three new challenge maps for the mentioned Survivor Mode. Each of which offers up a new perspective as to what occurred leading up to the arrival of the team.

To go a bit further in this new Alien Isolation DLC it looks like we are getting another new playable character into the mix. This character being the focal point for this DLC over the maps. Here is the story of the Corporate Lockdown DLC:

Sounds like all kind of fun is on the way to Alien Isolation as well as the story for the overall franchise. That is if all of this is taken as cannon but hearing how Alien Isolation has fared so far in the franchise it looks like that could be the case. None the less you can get this DLC, if you don't have a season pass already, for $7.99/€6.99/£5.59 via digital download on the PS3, PS4, Xbox One, Xbox 360, or PC. Which ever platform you are already playing Alien Isolation on already.