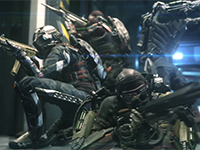 Good news for all us out there waiting to hear more on the four-player co-op modes of Call Of Duty: Advanced Warfare. Looks like we have a new mode to list from the latest trailer that has been released from Sledgehammer and Activision. The new mode is called Exo Survival and from what it looks like it is another survival mode where you and three others will have to 'survive' waves of enemies while wearing your new exoskeletons. Sounds like quite a bit of fun.

The new mode is nice and all but what really caught my attention here for Call Of Duty: Advanced Warfare was the look at the Iron Man-like armor that we may get to pilot during the campaign and most likely specific multiplayer matches. I'm not kidding when I call it Iron Man armor as it even has the nice little self-building process that has been made popular in the films as of late. If you don't believe me have a look at the new Call Of Duty: Advanced Warfare trailer for yourself.

See what I mean? I'm not knocking it at all, mind you. I am excited to see how it handles in Call Of Duty: Advanced Warfare. That and to see how the Scorpion grapple gun works as well. That would be the cable that gets shot out of the armor/exoskeleton that drags the enemy quickly over to you so you can snap some necks. Not sure how I feel about that being in multiplayer, if it is, but I will use the hell out of it when grinding the main story of Advanced Warfare.

The most unfortunate part of this new trailer is that now I am demanding more to see and experience as we get closer to the launch date (11/4/2014). Answers are needed so we can all prep for that Day Zero when we all boot up Call Of Duty: Advanced Warfare for the first time. I'm not a big fan of surprises when hopping into a multiplayer match. That is another reason why I tend to steer clear. I guess we'll see.