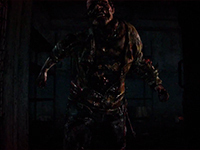 It didn't take to long for Capcom to give us what we all really wanted for Resident Evil Revelations 2, an actual trailer. Yesterday it was announced that Resident Evil Revelations 2 was going to be an episodic title to lead up to a physical release on the PS3, PS4, Xbox 360, Xbox One, and PC. There were also a few screen shots for the game in the mix but now we get to see them all in working order. We also get to see the evils of the Apple Watch that is strapped to poor Claire's arm…

I'll let you get to the meat and potatoes here before we dig in and talk about what we just saw for Resident Evil Revelations 2. Have a look at join the discussion just after the video. With me or in the comments.

Well there you have it. The first look at Resident Evil Revelations 2 up and running. Although I am a bit curious as to why we didn't get to see more of Moira in this trailer as she is supposed to be integral to keeping Claire alive but we'll gloss over that for now I guess. Let's focus back on how Resident Evil Revelations 2 looks like it is doing what was promised with bringing the franchise back to the horror side of things instead of the action. Nothing scarier than waking up in an abandoned prison with a wrist band that looks to be used for more than just a cool accessory. Most likely a mix of gameplay needs and keeping the player on task.

I do hope that they explain why Umbrella would be abducting a seemingly random person to put through "trials" of sorts when it would be easier to just kill Claire and call it a day. Then again Resident Evil Revelations 2 wouldn't be much of a game if it started up with the protagonist dying and then credits scrolling now would it. I'm sure there is some huge overall theme and reason why she was taken instead of every other title requiring the protagonist to attack Umbrella and get mixed up in all the insanity. We'll just have to wait and see I guess. Hopefully 'Early 2015' doesn't mean April but January instead.