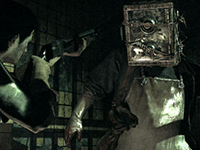 When it comes to season passes for games The Evil Within doesn't seem like it would be a title that would have a need for one. Granted, that is looking at most season passes as multiplayer add-ons for games or bonus maps for said multiplayer but that isn't the case here. Don't think that some form of multiplayer has been shoe horned in for The Evil Within when it wouldn't be needed nor wanted for the horror experience. It is all story or mission based content planned to roll out after the October launch.

What is interesting in this season pass is that the first batch of DLC you will get for the $20 USD price point (damn, that's steep) is that you will get to take on the role of The Evil Within's most notable baddie; The Keeper also known as Boxman. There will be a slew of mission-based maps that can be assumed to allow us to hunt down and murder all of those people running around in his domain. Hopefully it will give a little more insight for the character than what we have already but that is doubtful.

Also in the mix of DLC in The Evil Within season pass will be two more part of the overall story where will get to play out as Juli Kidman — Sebastian's rookie partner. I'm guessing it will be a lot like the Ada Wong stuff in RE4 where we get to see what is going on behind the scenes or after scenes we will play in The Evil Within proper. This makes complete sense given it worked so well in the RE titles and The Evil Within is using a lot of the amazing concepts and mechanics used in the past.

The Evil Within is still slated for an October 14th release date in the NA region and the 17th in EU. It is kind of a shocker that not only did the game's release date get bumped closer twice but The Evil Within is also getting DLC to go along with the bump. Why can't other titles and developers learn to do things this way? It definitely leads to a happier audience and fan base.