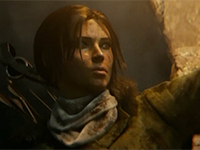 During the recent Microsoft press event at Gamescom it was claimed that Rise Of The Tomb Raider was going to be an exclusive for Xbox next year. This of course upset A LOT of gamers out there, like me, who fell in love with how Crystal Dynamics gave the franchise a re-boot. Tomb Raider Definitive Edition was the first retail game I purchased for my PS4. Well it would seem that during a recent interview from Phil Spencer this exclusivity may not be forever based on the deal Microsoft and Square Enix struck.

This interview comes from eurogamer.net where he was asked specific question as to the meanings of how things were worded for the Rise Of The Tomb Raider announcement. Here is what he had to say on the whole outrage that followed the exclusivity comment.

There was a bit more of spinning around this concept here but it is worth noting that Phil is not claiming to own the sole rights to Rise Of The Tomb Raider. This of course has some kind of good news for PC and PlayStation gamers out here as now it is up to Crystal Dynamics and Square Enix to release Rise Of The Tomb Raider when the deal they have struck with Microsoft ends. Granted, as he mentioned, this could be something along the lines of the Dead Rising duration of about four years until there was a proper game for other consoles or it could be like Ryse which is now coming to PC under a year after being an "exclusive" for the Xbox One.

Hearing this little bit definitely fills me with the excitement I lost for Rise Of The Tomb Raider when I first heard of the exclusivity. Especially if Crystal Dynamics and Square Enix want to make the most amounts of cash that they can off the game then they will sell Rise Of The Tomb Raider on the two consoles as long as they have to and then release the PlayStation and PC versions just at the end of the hype train for the game. At least that is how I would personally do the release structure for it because I don't see Rise Of The Tomb Raider being a console seller for the Xbox One but just an awesome game to add to a library.