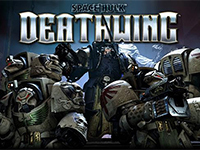 If you have an illness and the only cure is more space marines then look no further than Space Hulk: Deathwing. This is the latest in the Space Hulk franchise, at least in the video game world, and it definitely looks like it is going to have a cure for that illness. As if there weren't already enough of those franchises coming out later this year or in 2015 but different stokes for different folks I guess. You can take that phrase in whatever way you want but I meant it in the most Puritanical way that I know.

For those of you who may have the itch for 'more space marine' but have no clue what Space Hulk: Deathwing is then I'll simply direct you a bit lower where we have the 'summer' trailer for the game. One thing to note, this is for any and all, this is in-game video of Space Hulk: Deathwing. It is powered by the Unreal 4 Engine so it isn't all that hard to believe but just know that it isn't gameplay. Just in-game engine footage. Take that as you will.

Space Hulk: Deathwing does look pretty sharp but for those, like myself, who don't have need-more-space-marine-itus it looks like more of a generic, highly polished game. I'm also not a huge fan of the board games or the miniature games personally so I'll chalk all of that into the same column. Just because I am not a huge fan doesn't mean that I will keep this little gem hidden on YouTube so the real fans will miss out. Even just for fans of game engines it is a welcomed sight I guess.

Currently Space Hulk: Deathwing is slated for a 2015 release on the PS4, Xbox One, and PC. Once there is a bit more finalized on the game I am sure we will get the 'winter' trailer as well as when to expect to get that ever so needed cure to the above disease.