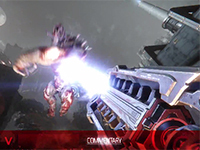 That latest trailer for Evolve is completely the way that multiplayer titles should do it. As you have most likely not jumped to the following trailer yet, let me explain. Turtle Rock and 2K have put together a nice nine minute game session for Evolve showing off some of the game's mechanics as well as abilities employed by each of the five different playable characters. The best part is you can hop between each of them to see what they see while running around trying to kill the Goliath or trying to survive and kill the players.

As of writing this I have yet to see the match through each character's eyes but I have watched the commentated version of the Evolve match and I can be colored impressed for this multiplayer titles. I completely love the very distinct difference between each as well as the mechanics needed to give each side the edge and advantage in the match. I won't go into detail on them as that is part of the fun of the following trailer but I do have to say that the mobile arena used by the trapper is an amazing addition to any multiplayer style of game. I wish it was in every multiplayer game to be honest. The problem is how to get it to work.

Before I let you off to watch the new Evolve match I want to touch on one thing that also caught my eye here. I had no clue before today how violent the game's environments where going to be in Evolve and I think it is shown well here. I knew there would be other beasties wandering around for the Goliath and Hunters to deal with but a truly skilled player can easily use them to their advantage as you will see in the video. It can really make or break a match from the looks of it. This also looks like a great addition to Evolve and hopefully all multiplayer moving forward.

Enough jibber jabber for now. I need to get back to watch all of the other characters in Evolve do what they do best. So do you so here you go with the latest 'interactive' trailer/match for Evolve. This year needs to fly by now!