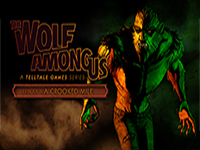 Just as I called it two days ago, A Crooked Mile, The Wolf Among Us' third episode has been given a launch date. That date being April 8th 2014. Only seven days after the new trailer for the episode at that. Just as I called it. The big kicker is that it is supposedly slated for a universal release to all platforms instead of PC and PlayStation first for a day or so. That is at least something good and new.

I honestly don't understand the reasoning behind Telltale's choice to keep these two tidbits of news separate to be honest. It really makes no sense at this point as it has become common place to just assume the launch of any new episodes for The Wolf Among Us or any other of Telltale's titles will take a week from any new trailers. Is it that hard to append the date to the end of a trailer? Last I checked it wasn't but hey, I don't work directly in the marketing department anywhere.

In the end, The Wolf Among Us Episode 3 will be out next week on the 8th. Hopefully it picks the game up in a good way. Here's that trailer as well for those who are too busy to click a link or two.