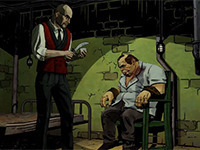 As has been announced, episode two of The Wolf Among Us is coming to our chosen platforms and countries this week. Any who have played the first episode or have read ahead on the game should know that it is titled Smoke & Mirrors. It should also hopefully pick up where the last episode left off in the action and excitement area too. At least that is the hope although it doesn't look like we will be hoping too much given the below trailer for the new episode.

This trailer for The Wolf Among Us Episode 2 looks to have everything we could want even though it shouldn't be viewed in front of children or anyone who is sensitive to a little nudity and implied torture. By implied I mean that they show a few intense looking scenes in the story that look like we will be given the chance to enact some crazy torture to get answers from the last episodes questions. I am just glad that the nudity wasn't implied.

Looks like we will all find out here tomorrow (2/4) on the PS3 and Steam versions in the North American region. All of you 360 and European region people will have to unfortunately wait until February 5th. But hey, at least that isn't too long of a wait like we all had for this new episode.