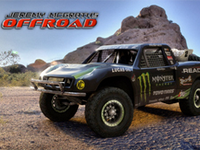 The AI is not over powered. They do not play 'catch-up' as you pass them and their skill remains the same from start to finish. That said, Jeremy McGrath is always your number one placer unless you, the player, pass him. The AI is not afraid of wrecking into you to make themselves higher in the standings. They will use the track to pass you, and subsequently, get passed up as well. A few occasions I have seen the AI knock another car off the track and have to have them drive back to the road. No magical traction boost to assist them, as is common in NFS or other games.

The tracks are nice, varied and span the globe. You have a South American tundra, icy hills in Alaska and the deserty flat lands in the South West US, to name a few. The maps have nicely planned out curves, hills, small dips and jumps, which are never too complicated to overcome, yet if not taken properly will send you out into the trees. You have minor air control to center your car to better stick the landing and while it would benefit greatly from the ability to do tricks or stunts, this still works fine.

The upgrades on your vehicle are done via experience points earned by passing opponents, knocking down signs, hitting trees, drifting, clutching round a bank and of course placing in the race. These EXP points can be used to upgrade your favorite skin for each car (yes, each skin has different upgrades), or things like handling, top speed and acceleration. Pretty standard for any racing game.

This game literally has no drawbacks. No bugs, yet no real frills either. I was told it has the same looks and feel of the PS2 game ATV Offroad but as I have not played that I cannot confirm this. Jeremy McGrath's Offroad is a game that is obviously geared towards the hardcore offroad fans with little to interest those who are not. Over all great game, well made and I hope see more in-depth games from the developer 2XL Games in the future if they can continue work as smooth and flawless as this one.

Jeremy McGrath's Offroad was developed by 2XL Games and published by Reverb (PS3) and D3publisher (360) on June 20th 2012. A 360 version of the game was supplied by the publisher for review purposes. The game is out now on Xbox Live Arcade and PSN for 800 points and 9.99 respectively.