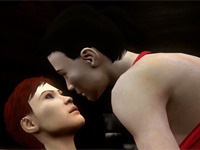 Funcom must have felt bad that got to see the new stuff so they up and decided to post part of the presentation online. 34 minutes of said presentation to be exact and it details the basics of character creation to showing how the Dragons become more than just schlubs to a full "dungeon crawl." Boss included. Isn't that nice of them? I think so.

A few other things I need to mention before you hunker down for this long and fun showing, they briefly go over the 500+ abilities you can get as a player. They also talk about how you can only have 7 passive and 7 active abilities at one time. This is an early build of the game so the customization does look a bit limited for now. Finally, I do need to warn that there is a sex scene during the Dragon's intro. Nothing graphic but depending on your personal viewing area you may want to consider it a little not safe. At least for those few minutes.

After seeing all of this I do have to say my excitement has been raised back up to where it was when The Secret World was first announced. I don't know what it was about the boss fight near the end of the video here, but it just felt not so MMO-ish in my eyes. Here's hoping that I can land a spot in the Beta before I shell out my cash to play the full game.