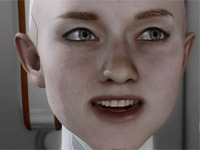 So while this is just a tech demo showing off the amazing talent of Quantic Dream one would have to say that it is extremely impressive. I'm not talking the fact that they are running the whole thing native on the PS3 but how detailed the face was captured and animated. Specifically the fact that short of the eyes looking empty they were able to capture even the smallest of details on the face activity to add an extra level of subconscious immersion to the character.

We take a lot of it for granted but when we have social interactions we pick up so many cues from the smallest details and we don't even know it. It is one of the barriers I feel in creating a truly 100% immersion that film and TV can do at this time. While this is a cool little short I don't think that many of us gamers take into account specific things like the lip movement when rolling R's and if you watch close enough for these kinds of things you will see it here. Something you would take for granted every day but it can affect how you "feel" towards people and in turn virtual representations of them.

I know I am excited to see where this goes and how it gets utilized in gaming. Like I said it is on the PS3 right now but it will most likely be portable to all forms of gaming. Think about having games that could stir emotions on a subconscious level due to you truly feeling your game characters are real. How different would the death of Aerith have been? Think about it. I can't wait to see where this goes. Keep up the good work over there.