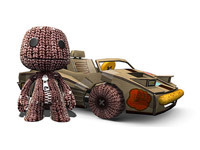 I will say that it may be a little premature to judge LittleBigPlanet Karting as being pretty much the same thing since there has yet to be anything other than the announcement as of yet. I mean, it could be something completely different and is just in a similar genre. I guess we'll find out here in the coming months or at least by E3.

But hey LBP fans at least you can look forward to another installment in the franchise. That and the fact that this game will have PS Move capabilities as well as 3D. Why would we not expect that though since almost all of their upcoming titles have both included nowadays.