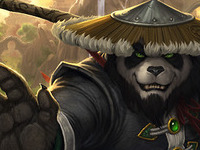 Anyways, the new trailer shows off the land of Pandaria, a place highly influenced by Asian culture and architecture. Blizzard said that the new expansion will not have a "main enemy" but instead focus more on the War between The Alliance and The Horde.

Here are some of the new features:

The plan for Mists of Pandaria is to have people explore the World of Warcraft instead of just hanging out in Stormwind or Orgrimmar constantly once a player has reached the max level. They are also combining some new game play elements with the fun parts of the past.

Some of the racials for the Pandaren include:

Dungeons will now have a "Challenge Mode." What has been announced so far is "Race Against Time". Which is basically time trials for dungeons, and there will be medals, achievements, mounts, titles and other goodies for completing these challenge modes in good time.

Some of the new zones are:

What do you guys think? I can't wait for this new expansion. Leave a question or an opinion in a comment below.