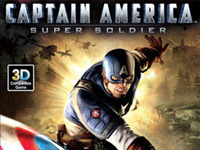 Intelligence has gotten back to the Allies that some of the allies to the Axis powers have been forging new technology that rivals that of Stark Industries during WWII. With that, the Allied forces push into Zemo Castle where all of the research and development is taking place. Quickly it is discovered that their defenses are too powerful for just mere soldiers, so they send in Captain America and his team. They are able to push back hard enough to suppress for now and to find out about a hidden secret technology lying beneath the castle.

I don't think I've been this frustrated with a 3rd person camera angle. It did get better with time, but it was like they wanted you to be zoomed in over Cap's shoulder. This wouldn't be all that bad except for the fact that you are almost required to be able to see the whole battle field. Then there were the constant shifts you couldn't control when the camera took on the 'platforming' view. In some cases this would force you to accidentally guide Cap over a ledge and to his death.

Another thing that I found a little out of place was the collection portion of the game. I understand that it was used as a tool to supply a deeper story, but there was just something wrong with placement and the need. Why on Earth would there be 4 Fabergé eggs sitting in the middle of a bunker? On top of that, why would I find "confidential" files lying around on explosive barrels or in a prison toilet? For being efficient and secretive, the villains of the game were extremely careless on where they left their important documents. Documents that Cap was able to use to find weak spots in security and structure to boot.

Now I don't know if it was just design for a younger audience or the want to make Captain America truly an ultimate badass, but as the game progressed it seemed to get way too easy. It was like all of the villains and bosses just simply started to give up as you got closer to the end. Even the final fight was almost a cake walk. It did make progressing through the story nice and easy, but I felt that the challenge had completely walked out. Yes, I was fully upgraded about half way through the game, but you would think that the villains would have been upgraded too.

Lastly, the game was short. Too short. In fact it could easily be beatable in a few hours. I took my time hunting down all of the collectables in the game and it still only took me a little over 7 hours. The bulk of the game is probably only 2-3 hours. Like I said, short. It left me wanting more, which is good but that should have been after at least 7 hours of story and solid game play. Not 7 hours of hunting down items that shouldn't have been strewn about the castle.

To be honest, if the overall story of the game parallels the film in any bit, it is going to be a huge success. They nailed the WWII superhero story perfectly and made you care or hate most of the villains of the game. I actually couldn't put the controller down because I was interested in seeing what happened next. Just like the hay day of reading the comics back before they tried to make the 1990 film. I am a sucker for a decent story and this game had one.

I was also surprised to see that the combat system here looked to be slightly lifted from Batman: Arkham Asylum. It was easy to use and mad Cap look like the badass Super Soldier he is. Even all the shield add-ins didn't clunk down the system at all. I was able to beat the crap out of a grunt and break half way through to deflect a sniper's shot only to continue beating ass. The combat was very well done.

I also have to throw in kudos to the platforming system as well. Once the camera issues fixed themselves and Cap was ready to jump and swing he could move about with the same fluidity as the combat. Not only that, but it looked spectacular as well. That is if you hit the timing perfect on the jumps, something that you get rewarded for as well. I was a bit hesitant on this being any good, but the team managed to nail it on the head.

Is Captain America: Super Soldier a perfect game? No. Is it just another film tie-in to rake in the dough? Maybe, but it doesn't feel that way. It truly felt like the dev team was given the project and rushed near the end so that they could get the game out for the film's launch. The only difference is that it felt like they had been working on it well in advance so it wasn't a rushed piece of crap.

If you are a hardcore Marvel collector/gamer, I wouldn't feel bad saying you should add it to your library. It does have a little replay ability with the challenge maps, so you would have a few other reasons to put it back in for play other than being a fan. For all the others out there, I don't regret playing this game in the least bit, unlike Iron Man 2. I also wouldn't say that it is fully worth a new game purchase price either due to its length. Maybe wait or rent it.

Captain America: Super Soldier was developed by Next Level Games and published by Sega on July 19th 2011 for the PS3, XBox, Wii and DS. A PS3 copy of the game was supplied by the publisher for review purposes.