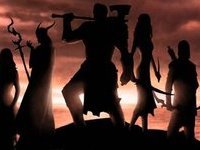 So there you have it, another Dungeons and Dragons title by Atari. I was a little more excited for this title before I played Daggerdale, but hopefully Cryptic Studios will not let this product fall by the wayside. Also with R.A. Salvatore on the project (Kingdoms of Amalur: Reckoning), I'm expecting a deep story line with tons of action-oriented game play. Just imagine a four player MMO, just one person shy of a dungeon delving party.

Where Neverwinter really shines is with its multiplayer online play. The focus is on you and your buddies traversing the world together. If you can't come up with anyone to play with, you can always embark on a single player campaign with "Henchmen." These are NPCs that you can command and boss around at your leisure. Encounters will actually scale depending on how many players are logged into the game as well.

The most important news about Neverwinter is that players will have the ability to create user-generated content, which was a HUGE replay point with the original Neverwinter Nights series. Content is supposed to be very simple to create so anyone can have access, but at the same time give serious modders an opportunity to get down deep and make some amazing creations. After its initial release, we should see some DLC come trickling down as well, to keep the content fresh.

I'll say it again, I'm excited for this game, but Atari has burned me in the past. Bring me a title worthy of the Dungeons and Dragons name and I'll sing its praises like a bard in a brothel, but if Atari releases another half-assed D&D game I'll be as pissed as a beholder.