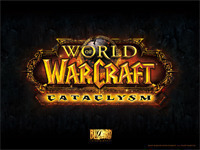 Blizzard will be hosting these events all around the world including the US, Canada, France, Germany, Russia, Sweden, the Netherlands, Spain, the UK and Taiwan. For all of the US players expect a huge shindig on December 6th starting at 9pm PST. If you have ever been to one of the Blizzard launch events you know that this is going to be a big one. The launch event will take place at the Fry's Electronics store in Fountain Valley, CA. If you need an exact address head over here for details.

What's in store for attendees? Looks like Blizzard will be hosting an infamous Warcraft dance off so we can seem some sweet Tauren dance moves. Also a performance by The Artist Formerly Known as Lvl 80 Elite Tauren Chieftain who was mysteriously absent from this year's Blizzcon. Members of the World of Warcraft development team will also be on hand to do signings and discuss the game, along with some phat lewt give-a-ways (collector's edition anyone?)

Considering this is the largest expansion that has ever graced the Warcraft Universe in its six years running, you can expect this to be one hell of a party. If you're not close to the California area you can always buy the digital download and be ready to play the minute it goes live! You can also stand in front of your local game store till midnight and pick up your boxed copy. Of course The Artist Formerly Known as Lvl 80 Elite Tauren Chieftain probably won't be there, but at least you'll have the game.

From the Press Release:

The next two weeks will be flooded with content, news and preparation for the new expansion. So if it's been a while since you last logged in, wipe the dust off your toons and get logged in because Azeroth will never be the same again.