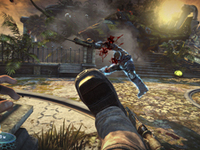 I am actually completely impressed with what I am seeing and have seen for BulletStorm. It looks much like Cliff describes, a Gears of War for all major consoles. Only instead of chainsaws, you'll be able to flail other people's heads around or throw ninja star covered with lightning. Maybe.