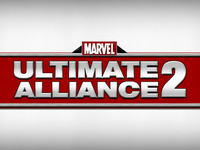 Why is this important to know? Well this is the main story behind Marvel Ultimate Alliance 2, with only a few variations and alterations to the story for game purposes. That translates to a very different means to the end of the story. I won't ruin that for those of you that have not played to that point yet, but I will tell you about the non-spoiler parts of the game.

The controls of the game are quite similar to the game's predecessor. The attack and interaction buttons are mapped to the same locations by default as with Marvel Ultimate Alliance in the past. The only significant difference to the entire control structure is the inclusion of the individual Fusion powers that can be activated during the game. While mapped similarly to the four person super attack from MUA, the activation of Fusion powers in single player mode can be a bit of a hassle and sometimes work out as a detriment to you. In multiplayer mode, the Fusion powers are simply activated by Player One pressing the button to state they want to do a Fusion move. Player Two then presses their corresponding button to activate those characters' Fusion attack. Not too difficult. In single player, you press the same button to bring up icons over the other NPCs heads freezing them in place while you figure out who you want to fuse with. This brings up two more issues that make this a little frustrating.

While you are deciding who is mapped to which button, the NPC heroes still get pounded on and just stand and take the abuse. They don't react while getting shot or punched at all. Sometimes it can take you a bit to remember who is which button and if they are all grouped together on the map, the icons over their heads become useless. This also goes hand in hand with targeting bosses with some Fusion powers. It's just hard to see where you are targeting because of grouping and camera angles. It just feels like this could have been tightened up a bit for my tastes. As is the case with most sequels today, the graphics between the older game and newer are night and day. This is very much the case with MUA2, as you can see with the smattering of screens here. Yes, they are all gameplay shots. The character models are stunning and all the other visuals of the game are way beyond the old 3D sprite looks of the first Ultimate Alliance. But that is to be expected.

What I do find interesting is the fact that there are fewer CGI scenes than in the first game. In the first game, in between major portions of the game there are fully rendered clips showing the story progress, as well as a few using in game graphics. In MUA2 they use more animatics to do this instead of CGI, which was kind of a let down to me. I really wanted to see action on some of the story parts, but all I got was a voice over some 2D cartoon "still" shots. Yes there are a few CGI clips in the game, one of which does show a battle royal between both sides, but I was expecting a few more in general, given the updated graphics. With an epic story like this being told, you would expect that the audio for the game would be amazing. Everything from the Music to the Effects to the Voice Overs would need to be over the top. It's the only way to do the story justice. In this area, Marvel Ultimate Alliance 2 does not let you down. All of the sounds and voice overs were done very, very well. The music kicked up just right for the proper dramatic effect. The sounds made from explosions and powers going off made it feel like you were in the mix of things the entire time. Everything here added to the overall enjoyment of the game.

The only issue I ever had with the audio was something I think is linked to my system and not the game though. Mainly during some voice overs, one character would be set to cut the other off during a scene and there was a second or two delay before the speech would start again. Kind of like the character that is doing the cutting off wanted a small awkward moment before they added their reason for shutting the other up. This ruined some of the flow for me, but not to a point where it felt like the VO was poorly done. Like I said, I blame my system. Plain and simple, this is a button mash extravaganza with very little planning required. There is nothing wrong with this in the least, but this game is not about perfect timing or full strategy at all. Yes there is need to use Fusions and Powers at certain times, but for the most part it was me button mashing the power two or three times then back to basic attacks. A lot of fun despite the fact it seems like I am making it out to be something very mindless.

I will add that the customization of the story and character stats does add a lot more than the first game did. The fact that you have three types of options to respond with and each character has their own way of saying the response adds a little spice while playing with each character. Granted, I went through with Deadpool the entire time so my experience was little more on the comical side, but until I unlocked him I swapped it up between the other heroes I had. Conversations go much different when playing as Spiderman than if playing as Hulk. This game can get a little repetitive as it goes with controls and combat. Like I said it is a button masher. But what makes this game overly fun is the interactions and story in the game. Following the story and making my choices in the "choose your adventure" form was enough to make me keep coming back to the game. The mixture made for a great playthrough of the game and made me interested to see what would be different if I took the Pro-Registration route in the game or made different character choices in the game. This is just as a game should be for replay and fun value.

Although I have gripes mixed in all over up there, I had a blast with this game. Especially hearing the heroes describe certain parts of their back story. Penance (see below) for instance had me overly intrigued. Yes it does get repetitive in the button mashing, but it was the drive to get the full story that kept me coming back. Even though they did deviate from the main story, it was only a slight deviation. No spoilers like I said. I totally recommend you to pick up this game if you were/are a fan of the Civil War story, the first Ultimate Alliance, or a Marvel fan in general. You won't be let down by this game at all. It has enough replayability to keep you coming to see what else is going on.

SnappyDude [ Friday, 25th of September 2009 - 08:41 PM ]
Considering I have over 10 played threw on the first one I will pic this up as soon as I can. Thanks for the review
Go ahead and login or register