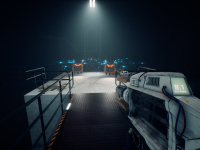 It is coming up on the time we need to start thinking in reverse with the release date for The Entropy Centre now set down. This would be that first-person puzzle title that we have coming from Playstack that was announced a bit ago. There was no date then, and I think they would like to rewind all of that as they will in The Entropy Centre, but here we go. We will be able to see the game on the PS4, PS5, Xbox One, Xbox Series X|S, and PC on November 3rd as of now. It looks like things are perfectly on track for it, but there always needs to be some wiggle room to make sure things do not go sideways.

Those that have missed out on The Entropy Centre up to now, can have a look at more of the gameplay we will be getting in November now. It all feels a bit more like Portal with a lot fewer portals shot around out there. Not that it is going to be a bad thing, but it does feel like something we have seen a few times already. The bigger difference is that we are looking to rewind things out there for the world instead of just doing some basic science puzzles. Granted, that is a gross oversimplification for The Entropy Centre based on the basics we have seen. Have a look and start getting excited to see this title land here in over a month.

The Entropy Centre is a mind-bending and deviously challenging first-person puzzle adventure (with a talking gun). Coming November 3 2022 to PC, PS5, Xbox Series X|S, PS4, and Xbox One.

Did you keep up on The Entropy Centre before now or did you forget it was going to be a title we get to experience here? Did you think it was going to make it out before the end of the year or did you think it was going to be early next year? Does it feel too much like a game we have played before or will it be different once it all goes live here? Tell us all down in the comments what you are thinking about for the game and then get ready for more to be shared. We will certainly have more for The Entropy Centre up to and past the launch, so please keep checking in for all of that and much more.