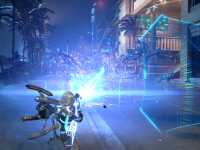 It is story time here for Exoprimal with a whole new trailer to look at that debuted during this year's TGS that tries to explain a bit more of what is going on here. Not that we all really need more reason to go out there in some exosuits and shoot up wave after wave of dinosaurs that are flooding the streets. Well, maybe some of us need more for that, and that is where Capcom flow in and gives us all a little bit to take in for the story. That and a little more about the characters we are going to be spending so much time with in Exoprimal when it drops on the PS4, PS5, Xbox One, Xbox Series X|S, and PC in 2023. They do look like they will be a fun little cast to hang with too.

As the story alludes to here, Exoprimal will be showing us that we will be facing off with some temporal rifts out there that are just randomly opening up to cause these floods. There also looks like there is a bit of a rogue AI doing some things too while we team up with random robots and cyborgs too. All of this feels like it is going to be very "anime" when it comes to the story. Something that will be over the top for no reason but also overly convoluted to try to explain away why we are heading out to the streets with our guns to shoot waves of dinosaurs. Again, I do not think we need much more for all of this, but here we go with it all to take in and enjoy. Have a look and see what is on the way to us all here.

Dinosaur swarms are ravaging the planet, striking across the globe from mysterious spacetime distortions.

Humanity's salvation lies in the hands of Exofighters. Equipped with state-of-the-art Exosuits, they fight in never-ending wargames against the dinos and each other as they seek to eliminate the origins of the dinosaur threat.

However, wielding the power of the Exosuits also comes at a price…

Do you have any weird thoughts about the story for Exoprimal as it all stands here or will you need more to form a true opinion? How long do you think it is going to take before the robots go rogue and use that secret handshake to do some harm? Will there be a solid explanation on why these rifts are pulling in so many dinosaurs at once instead of the small packs we have observed that they did roam around in? Go ahead and tell us all of your thoughts on this down in the comments and then feel free to discuss it all as you so wish here. We will certainly have much more for Exoprimal, and to see it all you will just need to keep checking back in here. Then we can all make heads and tails of what is going on before just jumping into the madness.