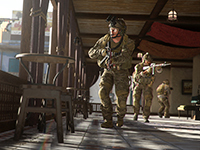 More Call Of Duty footage is here with the showcasing of what we can look to expect in the multiplayer for Call Of Duty: Modern Warfare II

As if we would ever have a Call Of Duty title out there now that does not have some form of multiplayer mixed in. Ever since it was locked with the popularity of the first instance, it has been a staple and something that gamers always complain about. No matter how many new features, changes, or upgrades that are mixed in. Gamers are generally terrible is what I am going with here. That does not mean that Infinity Ward is not going to add it into Call Of Duty: Modern Warfare II here or not improve upon it all. That would be a weird thing indeed. Thankfully, the Open Beta for it all is going on and everyone can have a sample of what is coming to the PS4, PS5, Xbox One, Xbox Series X|S, and PC on October 28th. For those that only have limited time, though, here we go with a quick look to see what you might be setting time aside for in the future.

For the most part here, as you can see below, the multiplayer for Call Of Duty: Modern Warfare II is going to be following most of the same shoot first and ask questions never style of gameplay we have seen time and time again. Newly upgraded visuals, some maps coming in and out that we might remember, and some fancy high-action visuals to go along with it that most of the average players will never get to see in the mix. There is a new version of the Gunsmith mechanic coming so we can all further customize our weapons that will be claimed to be "Nerfed" due to player lack of skill. Also, there is a new third-person option coming in for the first time in Call Of Duty. At least it looks like it will be third-person until we go to aim or shoot. Not to mention a new way for players to try to see more of the map than the realistic first-person mode will allow. I am curious to see how well this option will go down before players start using it to see around corners and other areas to get some kind of extra advantage. Then we will have all manner of new complaints coming in from the gamer base out there that just wants to complain. They are the worst.

What are your thoughts on the current state of multiplayer for Call Of Duty and will gamers ever be happy with it? How soon until the third-person mode is deactivated or only used in specific match types in the game? Will we get a whole lot of extra use out of the new Gunsmith stuff or will it only be for those that want to customize every little detail of their avatar in the game? Tell us all of your thoughts and let the discussion flow down in the comments. There will be a whole lot more for Call Of Duty: Modern Warfare II, so be sure to keep checking back in here for all of that and everything else that the team has to offer up along the way for it all. We only have a little over a month now before we have it all, so expect some bigger pushes very soon here.