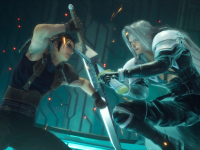 It is always great to get fun and unexpected updates as we have here for Crisis Core - Final Fantasy VII - Reunion with the release date getting set and meeting the original timeline that was set with Winter of 2022. It is usually rare that Square Enix will miss those timelines without solid upfront warning, so it is not too shocking I guess. All of that aside, though, Final Fantasy fans can now mark it down on the calendars that they can experience this Crisis Core remake on the PS4, PS5, Xbox One, Xbox Series X|S, Switch, and PC on December 13th. Just in time for the end of the year to keep us all locked in and safe during the colder times.

While I would have rather seen something more for the Final Fantasy VII Remake instead, I will take what we are going to get. Especially since it is a nice look at what kicked off the events of everything that led up to things. It might also give some of the newcomers a little more about why the ending of the first main chapter of the remake and why they should care about Zach. That is the dark-haired character that comes up right before the credits roll. Now they will be able to see things in a better light on how Zach and Cloud's relationship and where the villain's motivations are coming from. Have a look at Crisis Core - Final Fantasy VII - Reunion just a bit lower and know you will be able to have it in your system to distract from the usual family drama of the season.

Play as SOLDIER operative Zack Fair and trigger the events that lead up to Final Fantasy VII. Engage in fast-paced real-time action combat to uncover the dark secrets of Shinra’s experiments and the monsters they create.

Were you getting worried that they might have missed the release window for Crisis Core or did you think this was about right? Are you one of the fans that need to know where the characters come from here or have you known for quite some time now? When will we see a new update for the core remake and will that be teased at the end of this title? Sound off in the comments and then feel free to discuss it all as you so wish. More for Crisis Core - Final Fantasy VII - Reunion will be here on the site, so you will want to keep an eye out for all of those updates.